Coeliac Disease – What You Need to Know Part 5: Are your symptoms always down to gluten? 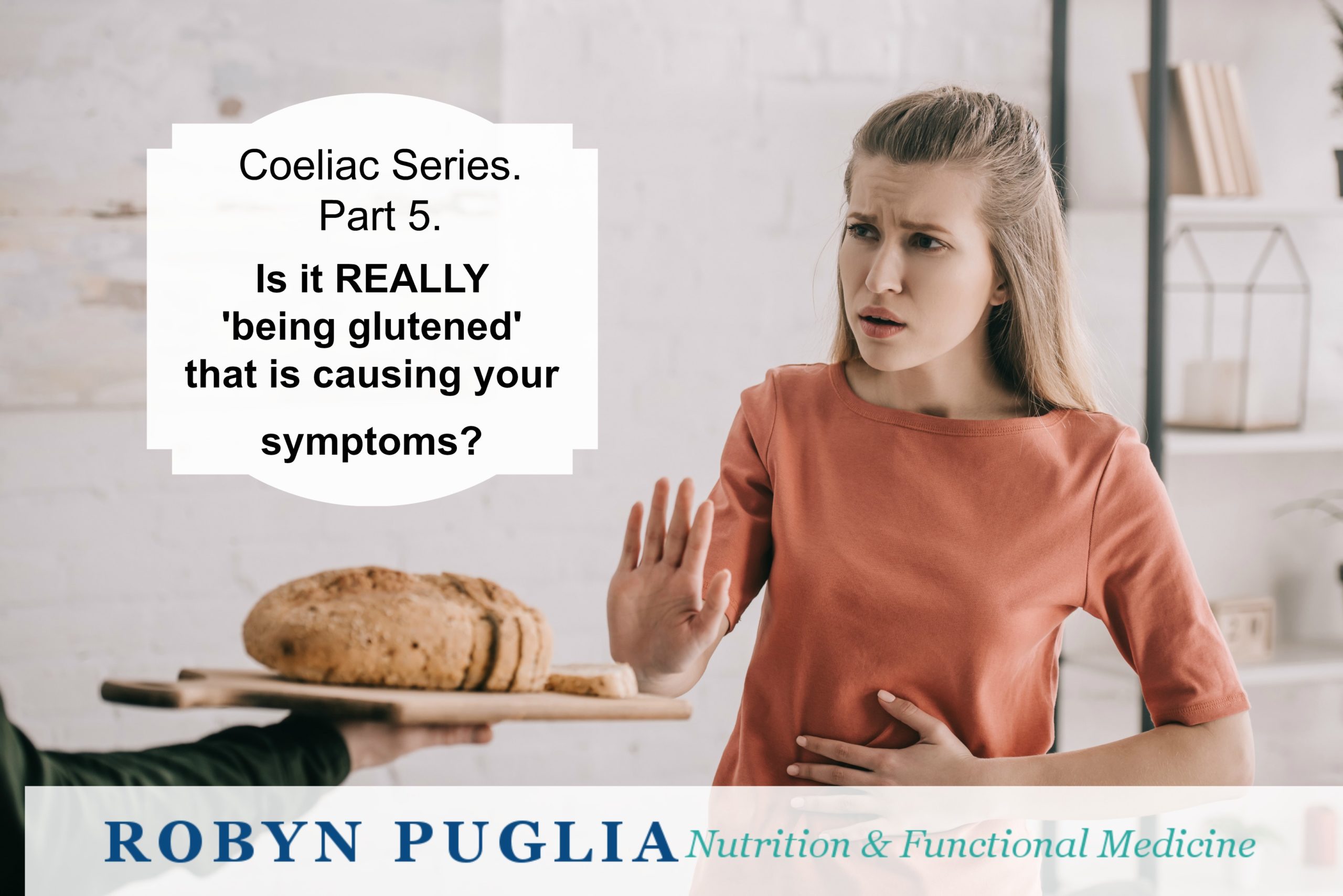 Last night, you went out with friends, had a couple of drinks and a lovely meal. You looked the restaurant up beforehand, making sure they had a gluten-free option – and that they knew to avoid cross-contamination. So far, so good.

You’re bloated, and you’ve been running to the toilet. Your head bangs, and you feel so tired. It’s all the usual symptoms you get.

But are you sure the culprit is gluten?

When you have Coeliac disease (CD), it’s tempting to blame it all on gluten contamination. However, as CD is an autoimmune disease, it actually has a number of complex influences on your body, that can arise even when you’ve not had any gluten.

So what else could be causing your symptoms?

Is It Coeliac symptoms or Bacterial Overgrowth?

You may have bacterial overgrowth, or just an unhealthy population of bacteria in your gut – which may be because you have coeliac disease

But when your gut wall is inflamed, and worn away from continued autoimmune attacks, it’s not so hospitable for your gut flora. So when your gut is sick, your microbiome gets sick too. Often the ‘bad’ bacteria – normally kept in check by the helpful bacteria – is able to run rampant, affecting your immune system. The role that microbes play in autoimmunity is debated in a chicken-and-egg scenario – after all, your immune system and your microbiome work together in symbiosis.

You may also be dealing with small intestine bacterial overgrowth (SIBO). The vast majority of your gut microbiome lives in your large intestine. Your small intestine contains far fewer microbes in number, but when there is an imbalance in these microbes the symptoms can be severe, and often overlap with typical coeliac symptoms. Especially when coeliac was misdiagnosed as IBS originally.

Symptoms of SIBO include:

Do these symptoms seem familiar?

Even if you don’t have typical gut-symptoms, by the time you’re diagnosed with Coeliac disease, your gut bacteria population can be like a garden full of weeds. The ‘bad’ bacteria or microbes that’s able to grow in the poor condition of your gut can contribute to your familiar symptoms of Coeliac disease, including:

I think in some cases those with Coeliac disease think they’ve been glutened – when in fact they’ve eaten something that has upset their gut bacteria. While this causes symptoms they associate with eating gluten, it’s actually down to a different irritant in the gut. And it could even be that gluten was causing that exact same reaction in the gut bacteria because wheat is a prebiotic…it feeds unhealthy bacteria if there is an imbalance. So it might be that you are having the exact same symptoms as when you eat gluten, even for the same reason, just minus the immune system response.

So you can see it’s not as simple as healing the villi in your gut. Sure, it’s an important element to improving your health – but without healing your microbiome, your gut and immune system won’t recover. You need to take a multi-pronged approach to improve the working of your gut, helping you absorb more nutrients and allowing the helpful bacteria to flourish.

Not All of Your Symptoms Are down to Coeliac Disease

When this happens, it’s a huge disadvantage. Maybe you complain to the doctor that you feel tired all the time, and that your hair is falling out. And the response you get is “As you have Coeliac disease – that’s normal!” But these symptoms can indicate more than a gluten intolerance.

I’m like you: I have Coeliac disease. And I know from experience – and from conversations with my clients – that it’s easy when you have a hammer to think that everything is a nail. When you’ve been diagnosed with a disease, with a specific cause – in this case Coeliac disease and gluten – it becomes easy to blame all symptoms on your diagnosis. You’ve been put in a neat box.

Or maybe you feel sick a few days after eating out and you assume that you’ve been glutened. Sometimes you think that despite how careful you are, you may have somehow contaminated yourself at home! But seeing everything that happens with your body in relation to Coeliac disease and gluten can be bad news for your health. Thinking this way prevents you from identifying or tackling other health issues you may have alongside Coeliac disease.

Instead of waving away new symptoms, it may be wise to investigate and see if anything else is wrong. You could be struggling with bacterial overgrowth, gut issues, other food intolerances, illnesses, or another autoimmune disease such as hypothyroidism or pernicious anaemia.

I also see a lot of people who are diagnosed with issues such as endometriosis, osteoarthritis or even PCOS after a diagnosis of coeliac disease….after they have gone gluten free. So if you have new symptoms, or persistent symptoms that don’t alleviate after going GF, don’t assume it’s because you have coeliac disease or that you’re being glutened.

Whether you’ve just been diagnosed with Coeliac disease, or you’re a seasoned member of the No Gluten Club, there are several things I really want you to know about your condition – and I urge you to take a look at the rest of my articles in this series.

Living with Coeliac disease is not as simple as avoiding bread, as it’s a complex autoimmune disease that requires understanding and care. But once you wrap your head around it – and remember that everything in your body is connected – it’s much easier to manage the effects and improve your health.

If you are still suffering symptoms after diagnosis and would like some support or are just feeling overwhelmed with the GF life, do get it touch. My team and I love to help my fellow coeliac’s feel healthy and joyful in the GF life.

You may also like to check out my signature course. The Foundations of Health covers all aspects of gut health, nutrition, detoxification, sleep, and mood, in order to get you feeling more like yourself. The course is separated into bite-sized chunks over 16 weeks, allowing you to learn and make changes gradually without the worry of information overload. Click here for more information. 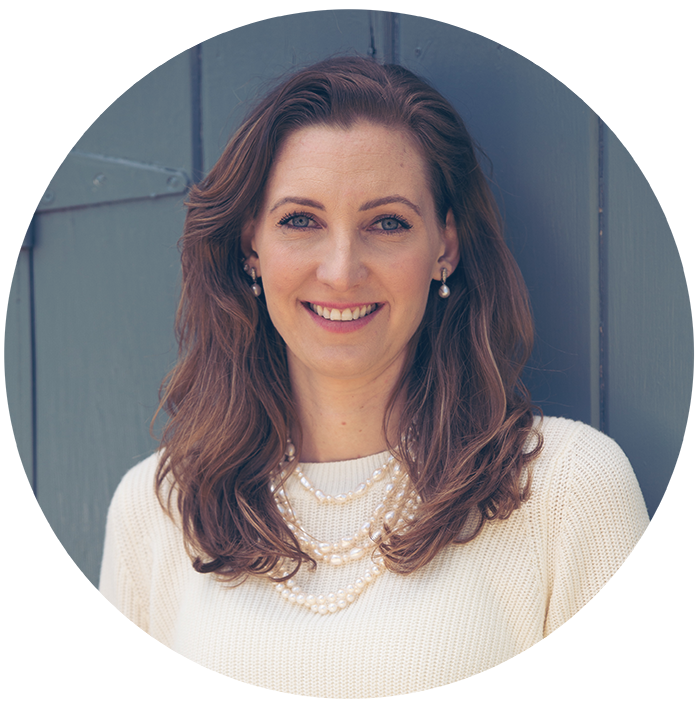 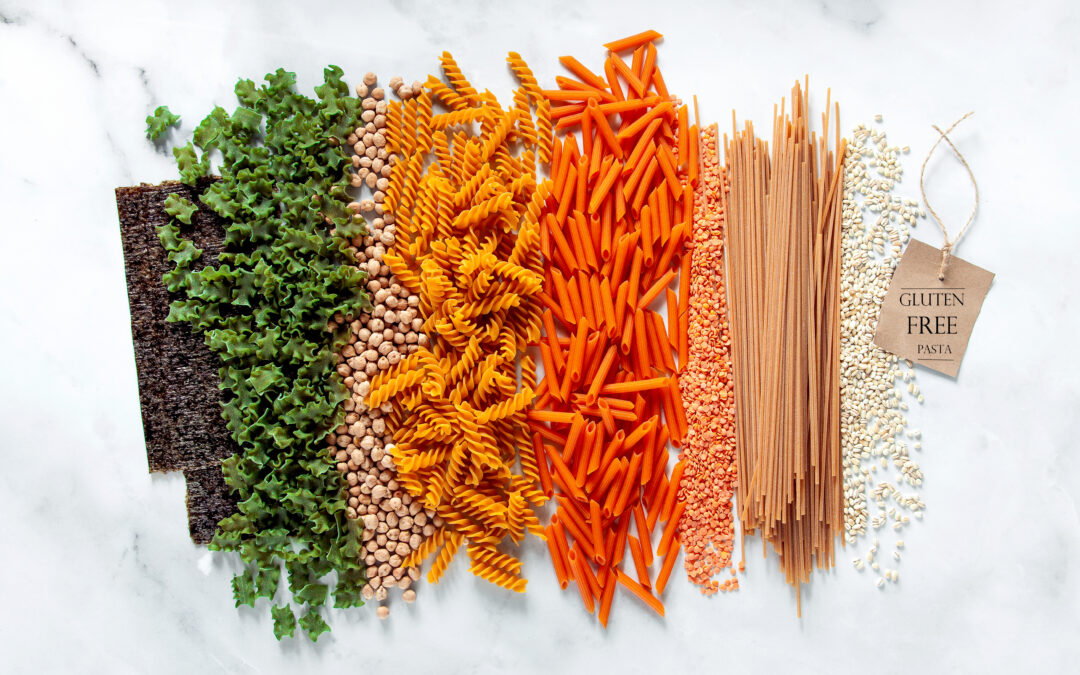 Diet and Autoimmune Disease: Does Cross Reactivity Affect the Food You Eat?

Eating when you have an autoimmune disease can feel like a risky business. Especially if you haven’t prepared the meal... 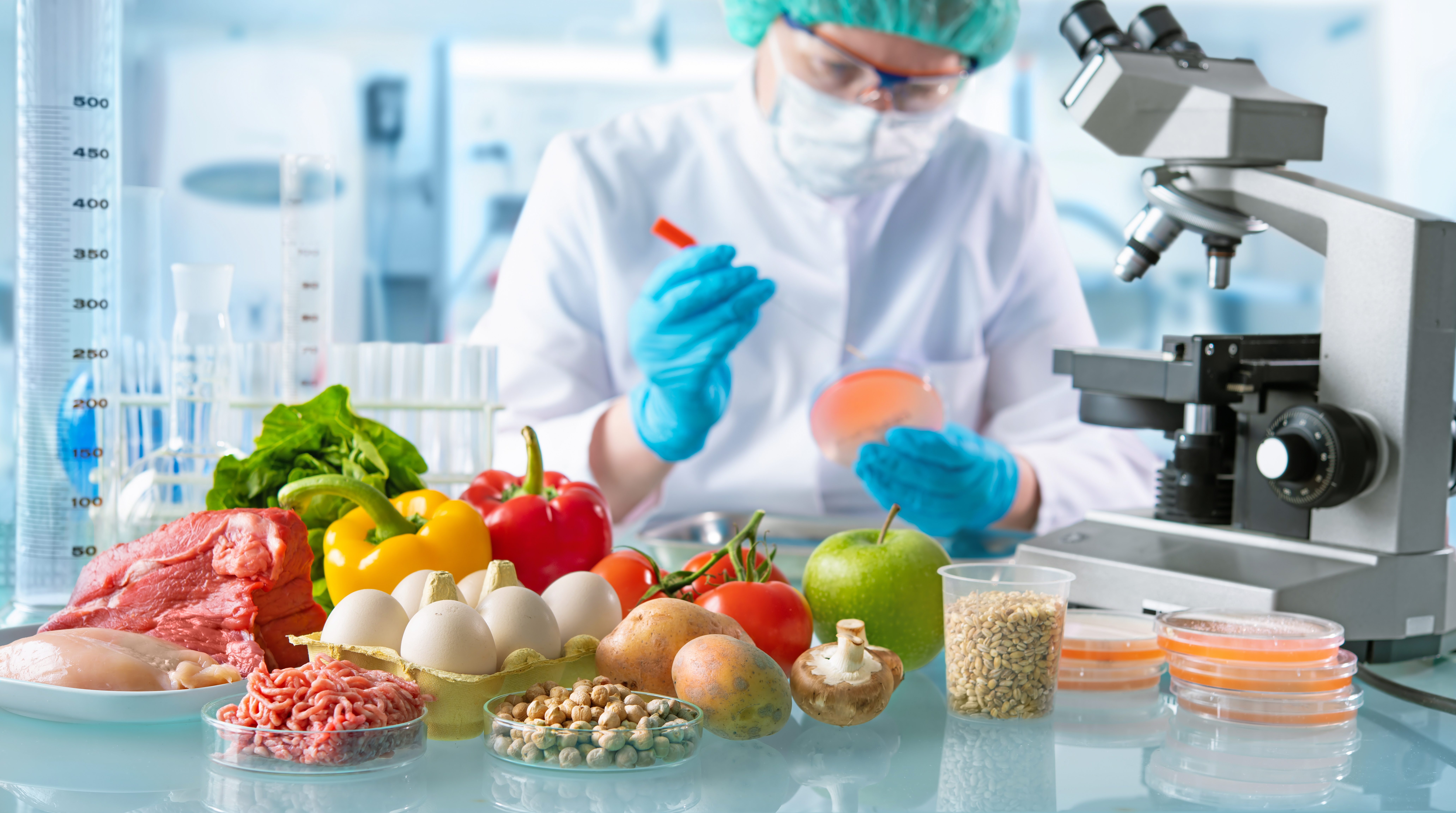 What foods, if any, should be eliminated when you have autoimmunity is probably the number one most discussed subject.... 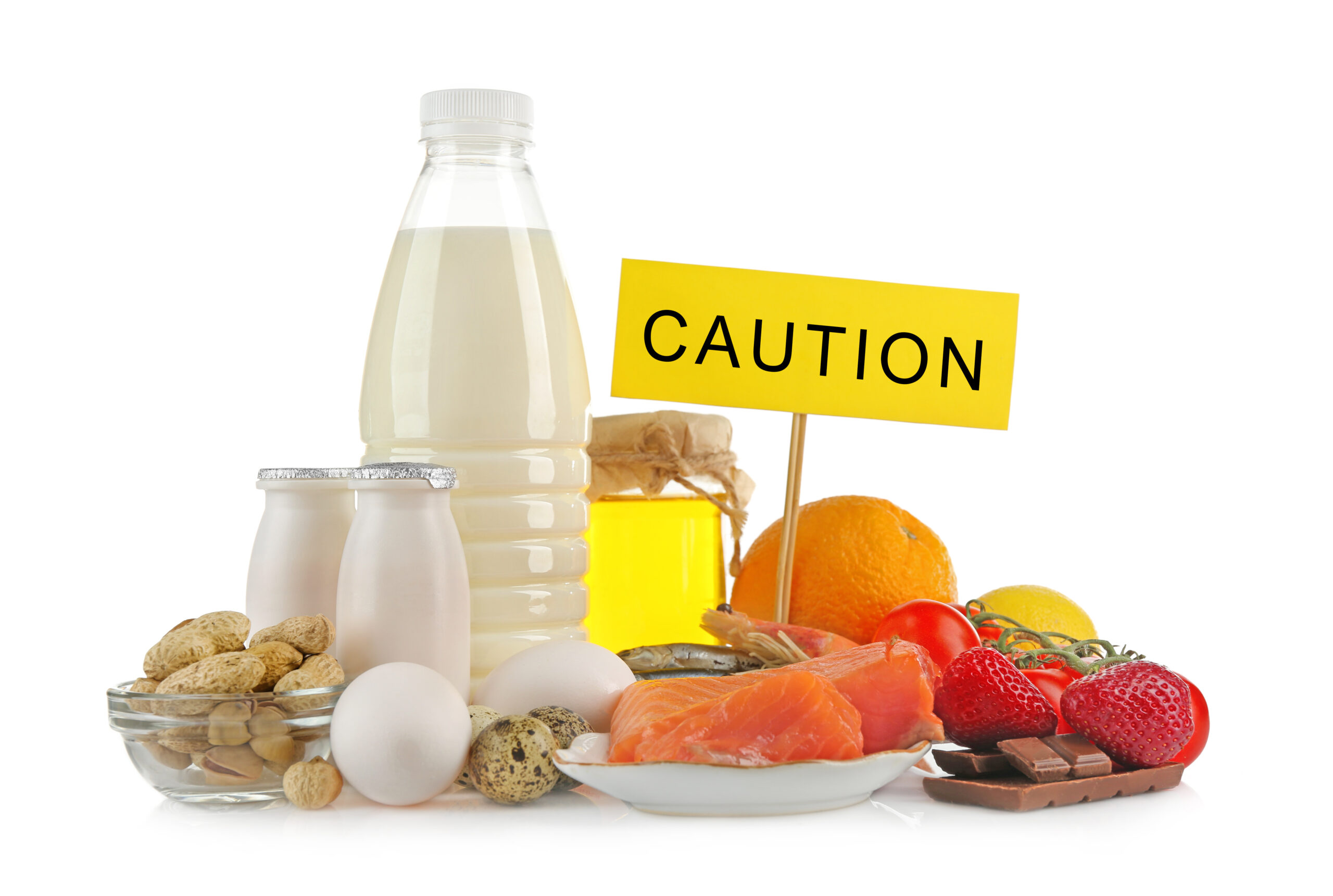 Oral Tolerance: Is your immune system attacking the food you eat?

How many times have you started a new diet that promises to cure your autoimmune disease? You bought the latest...